KD Enterprises are delighted to have been vetted by Renfrewshire Council Trading Standards and are now the 1st and only Man & Van service on the Trusted Trader Scheme.

Used Kevin for a house move last week. So, so glad we did. He made the process smooth and easy for us and brought John along as a extra pair of hands. They are genius, Tetris champions at packing the van, embracing every piece of available space. EVERYTHING we were taking from the house fitted in one load! They are professional and priced amazingly for the service they provide and the stress they took away from us. They are also really fun to work with.

We were packed up ready to go by 2pm, unfortunately the people leaving the house we were going to were doing the move themselves in a hire van and were behind schedule meaning we did not get access to our new property until 5pm. Despite the delay and waiting around for so long on top of the fact they had another job to go to after our move. Kevin and John remained happy and positive, with no stress or grief over the delay. They took it on the chin and accepted it as one of these things that go with house moves, where some other companies would be clock watching or demanding more money due to the delay we had none of this from Kevin and John. Their jokes and banter are not too bad either!

All in I can not recommend their services highly enough for a house move or delivering anything. 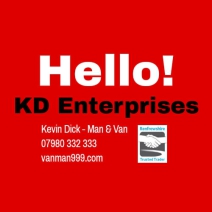